Row Well. Do Good. The Story of Alexandra Lisi Lengel

Alexandra Lisi Lengel has only been rowing a short time, but is already making a splash across the young rowing community with her new nonprofit organization “Catch & Feather.”

Under the motto of “Row Well. Do Good,” Catch & Feather offers fun and functional rowing attire with the proceeds from all sales going toward support programs for underserved youth through learn-to-row programs. An initial gift of $500 has been generously donated to USRowing’s America Rows Program, the mission of which rings true with Lengel. 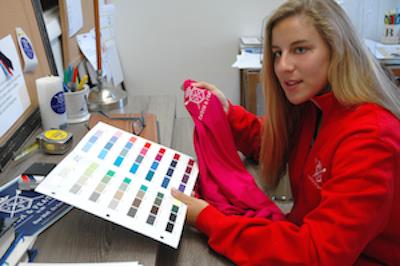 “Rowing sometimes has so many barriers,” said the Catch & Feather founder. “We want everyone to have the opportunity to learn to row and get to experience the wonderful opportunities that rowing creates.”What is remarkable about Lengel’s story is that she hasn’t even been rowing that long. The 17-year-old member of the Choate Rosemary Hall High crew started rowing when she was 15.Before picking up rowing, Lengel had been an enthusiastic athlete, an avid swimmer and tennis player. Her father, who also loved the outdoors and being active until his sudden passing in December 2012, inspired her.

His passion for sports drove her to try something new. When she picked up an oar at her first rowing clinic at Saugatuck Rowing Club in Westport, Conn., she never looked back.

“I had some friends who wanted to get involved and invited me to join them, and I couldn’t think of a reason not to,” said Lengel. “It was something new and interesting. Once I tried it, I was hooked.”

“She has a strong sense of fashion and classic things,” said co-founder and managing member Barbra Lisi, Alexandra’s mother. “We see this as a lifestyle brand, which is something that we think might be wanted by young rowers. There is performance gear and great t-shirts, but we wanted to develop something that will unite people in the community.”

Being familiar with USRowing, Lengel went through the website looking for programs which would be a match for her new startup. She found out about America Rows and she new immediately it would be a perfect match.

“In order for USRowing to continue providing scholarships and financial support, we need more organizations like Catch & Feather to designate a percentage of their profits to America Rows,” said USRowing’s inclusion manager Richard Butler. “With this new relationship, we will be able to provide funding to even more rowers next year.”

The mission of USRowing’s America Rows program is to support inclusion and diversity in the sport of rowing. Inclusion in sport means that individual differences are embraced and respected. USRowing is passionate about recruiting and retaining the most skilled professionals and athletes, and it recognizes that diversity will strengthen the sport of rowing by changing the lives of all participants.

America Rows also aims to increase awareness of rowing and create a national appreciation for the sport, in particular, highlighting its advantages for underrepresented youth, people with disabilities, and people of all ages, socioeconomic circumstances and fitness levels.

“It is so hard to pick and choose learn to row programs when you don’t know what the program is like,” said Lisi. “America Rows ensures that the knowledge base is there, and that makes it a great partner for us. We get to cheer on the effort and America Rows makes it happen.”

Catch & Feather will continue to branch out as the website www.catchandfeather.com is set to debut on May 21. The website and pop-up store will offer a boutique selection of rowing clothing and accessories that offer the most ideal combination of traditional varsity looks, performance wear and even a touch of humor.