Located on the clear, azure waters of the Intracoastal Waterway, Miami Beach Rowing Club is a rower’s paradise. Founded in 1995, the club is known for its hard work ethic and strong presence in the Miami Beach community. In addition to its youth and masters programs, MBRC warmly welcomes teams from around the country who come to escape the cold weather of winter. As if all of this was not enough for one of the most dynamic clubs in the country, MBRC is also home to a fast-growing — and winning — adaptive rowing program.

The MBRC Adaptive Rowing program began only a couple of years ago in 2014 by an amazing group of volunteers, and offers the opportunity for athletes — no matter what their situation or ability — the incredible opportunity to participate in a life-changing sport. Whether athletes want to be involved on a recreational basis, or compete at the international level, MBRC is there to make it happen. Amazingly, this young program already boasts Olympic experience! Helman Roman, an Afghanistan war veteran, and his double partner Laura Goodkind, competed in the trunk and arms event at the 2016 Paralympics in Rio! MBRC was the first club to receive the designation of Paralympic Sport club from the United States Olympic Committee.

In the summer of 2015, Stephanie Parrish, previously an assistant coach at Canisius College in Buffalo, NY, took on the position as the first head coach of the adaptive program. I had the opportunity to visit with Coach Parrish, and see firsthand the great success of the adaptive program, while on one of those aforementioned training trips to MBRC. It was inspiring to see the incredible work ethic of the athletes, and how we as a community can make rowing truly limitless. Whether it’s a fixed seat erg or boat with stabilizer pontoons, MBRC’s adaptive resources give its athletes every opportunity for success.

Looking as much like a supermodel as she does a head coach, Coach Parrish exudes a contagious enthusiasm and dedication to the sport and her athletes. She spoke passionately about the extraordinary healing powers of rowing. Since beginning at MBRC, she said her whole perspective on rowing has changed. “I feel like I have a completely different appreciation for rowing. Up until [joining MRBC] I had been coaching and competing at the Division I level and working with athletes who had a path sort of laid out for them. They were training for a specific, focused team goal and time spent at the boathouse was all business. Now I can see how therapeutic and peaceful it can be; I realized I had always associated rowing with intensity and pressure. I guess the biggest change I’ve noticed in myself is that I have a newfound love for rowing!” said Coach Parrish.

Parrish shared how the program has changed the lives of its athletes. For some, she said, rowing has brought a renewed feeling of independence. Athletes are able to push themselves physically in a way that other adaptive sports wouldn’t allow. Ultimately, she said, the program provides its participants with a sort of therapy, whether physical, mental or emotional. 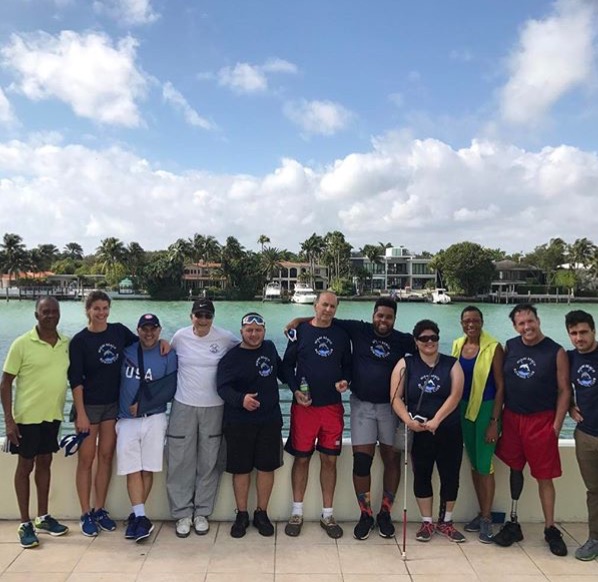 MBRC’s adaptive program has attracted the attention of the Miami community in a big way. People with disabilities in the Miami area have a thrilling new activity in which they can participate and members of the community have the opportunity to volunteer. It’s been especially popular for members of the MBRC Junior Team, who often volunteer over the summer to help at the boathouse. Coach Parrish says “I think people see that they can give back to the sport and the boathouse community by being a part of our program, and that’s an amazing thing to witness and be a part of.”

Note: You can learn more about MBRC’s adaptive program at: http://rowmiamibeach.com/adaptive-rowing/ and follow them on Instagram at @mbrcpararowing

0
3
CATCH & FEATHER ·
@CatchandFeather
It’s that time of year again! We are launching our annual xoxo campaign, where you get 15% off and we give 15% back to rowing outreach programs - because we’re all in the same boat! Use code - OneBoatOneLove - at https://t.co/4xaGMLrV8u https://t.co/RnDa1JFWKH
View on Twitter